Wikiprogress » Blog » Child well-being » From the Bottom to the Top: One Step to Improving Global Sanitation

From the Bottom to the Top: One Step to Improving Global Sanitation 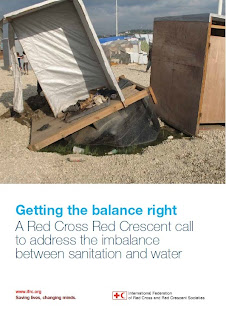 This article by Robbie Lawrence, Wikichild Coordinator, considers how global sanitation can be improved in the context of the International Federation of Red Cross’s ‘Getting the Balance Right’ report. This is part of the Wikiprogress #Health Series.

“Communities in rural areas and urban settlements must be empowered to increase their resilience through access to safe water, improved sanitation and effective hygiene promotion.” Getting the Balance Right, International Federation of Red Cross, 2013

This post follows on from Wednesday’s blog on the dangers of diarrhoea by focusing on the disease’s chief causation: poor sanitation. Currently 3.4 million people die each year from water, sanitation and hygiene-related causes (Water.org). An estimated 2.5 billion do not have access to basic sanitation and 1.1 billion of those people practice open defecation. This is not only degrading but a severe health risk as fecal matter-oral transmitted diseases cause at least 1.5 million deaths per year in children under the age of five (Getting the Balance Right). As Gary White and Matt Damon so bluntly put it, by the time you’ve read this paragraph, another child will have died from something that is eminently preventable.
In the same way that inequality has reared its head in the post-2015 discussions, forcing global leaders to consider how poverty reduction might be carried out more equitably in the future, it is evident that we need to address water and sanitation issues. The “Progress on Drinking Water and Sanitation 2012” report by the WHO and UNICEF highlights that, although the MDG target of halving the number of people globally without access to improved water source will be fulfilled by the MDG 2015 deadline, the target for sanitation is unlikley to be met.
More often than not aid donors and development agencies have aimed at providing clean and safe water supplies rather than making sanitation a priority. As it stands, sanitation only receives 12 percent of global aid put towards combatting water and sanitation related issues. In the short term this trajectory make sense, since water is usually in more immediate demand, however, if diarrhoea and other hygiene related illnesses are to be dealt with, access to sanitation facilities must be increased. The ‘Getting the balance right’ report emphasizes that ‘neither water nor sanitations is more important: both elements are required to maintain and improve health and dignity.’
Water.org argues that the inability of philanthropic efforts to efficiently deal with the problem of poor sanitation has been a problem in the past. Even the money that has gone towards solving the issue has largely missed the goal of providing relief for those most in need. The organization recognized that if local communities were to make progress, independent of donors, then they must be viewed and view themselves as the owners of the project. Community ownership is the linchpin of Water.org’s philosophy. Without an active engagement from communities from the start of a project to its completion there is a strong likelihood that previously entrenched social norms such as public defecation will continue.
The ‘Getting the Balance Right’ report delivers a similar message, and uses a number of examples of community-based initiatives that have succeeded in improving sanitation. In Eritrea, a country where only three percent of its rural population has access to sanitation, the IFRC and the EU implemented a program focused on mobilizing and educating women in hygiene knowledge that reached a total of 145,000 people in 120 villages. By empowering these local women and providing them with  information, the program motivated them to become promoters of sanitation within their own communities. The Water.org website also lists various bottom to the top initiatives that have shown remarkable success rates. An Emory University review of a Water.org community based ventures in Lempira, Honduras reported that 100 per cent of the project sites were still operational after 10 years with 98 per cent of respondents satisfied with the system.
Since poor sanitation is now firmly in the crosshairs of policy makers and aid groups, it seems that the Water.org and IRFC have laid out a fairly effective framework for combating the problem. Changing intrinsic social norms from the routes of a community appears a far more effective means of catalyzing change than large, trickle down cash injections. The flow of international water aid must of course be rebalanced towards sanitation, but organizations, governments and NGOs need to go further and ensure that it reaches the right groups and individuals. The stark reality of IRCF’s report brings to light the vital role that sanitation plays in human health and dignity:

“Let us speak clearly; the single largest cause of human illness globally is faecal matter. A society – regardless of how many clinics or water supply points it has – can never be healthy is human waste is not safely disposed of.” Getting the Balance Right