Uncategorized
This blog, written by Amy Cutter and Jack Cornforth of Stakeholder Forum, discusses the breakdown of proposed Sustainable Development Goals (SDGs) by theme, stakeholders and regions. It is a cross-blog from the Stakeholder Forum’s Sustainable Development 2015 website and is part of Wikiprogress‘ Post-2015 and environment series.
It has been a busy month for governments, UN agencies and stakeholders working towards a new sustainable development framework for post-2015. The UN Secretary General’s High Level Panel, Sustainable Development Solutions Network (SDSN) and the UN Global Compact have all published reports with their recommendations for new global goals to replace the MDGs when they expire at the end of 2015, and the intergovernmental Open Working Group (OWG) tasked with proposing a set of Sustainable Development Goals (SDGs) has just met for the last time before its summer break, to discuss how thematic areas such as health, employment and education could be addressed by the new goals framework.
Stakeholder Forum, with support from partners in all global regions, is contributing to these efforts by coordinating the SDGs e-Inventory, an online tool that provides stakeholders with a platform to outline what they think future universal goals for sustainable development should look like. The e-Inventory, which is available in three languages (English, Spanish and French),  also provides a searchable database to help stakeholders – including governments and intergovernmental organisations – to keep track of the wide range of proposals being developed on SDGs, and other global goals for development being proposed as part of the global post-2015 development framework.
The platform is concentrated on proposals that outline the thematic areas that a new global development framework should address, or that go as far as to suggest specific goals, targets and indicators. The SDGs e-Inventory is the only online platform that enables stakeholders to directly upload their ideas and recommendations to a database of proposals for future development goals. As well as being publically available online, this data will be analysed and shared with governments, stakeholders and relevant UN coordinating bodies, as the decision-making process progresses.
Before the OWG meetings resume again in November, the summer break provides an opportunity for governments and stakeholders to reflect on the discussions and consultations that have taken place so far. With this in mind, Stakeholder Forum has conducted an initial stocktaking of the proposals housed in the e-Inventory (71 in total), in order to provide a breakdown of the thematic areas that the proposals address, as well as a snapshot of the individuals and organisations that have put forward proposals on global goals.
Thematic breakdown of the proposals so far 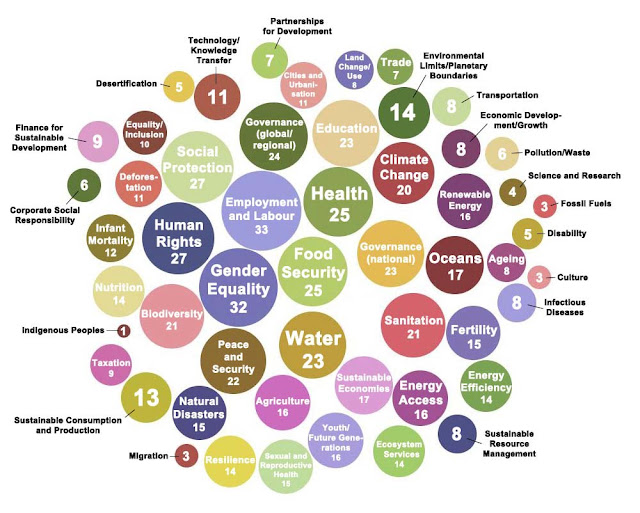 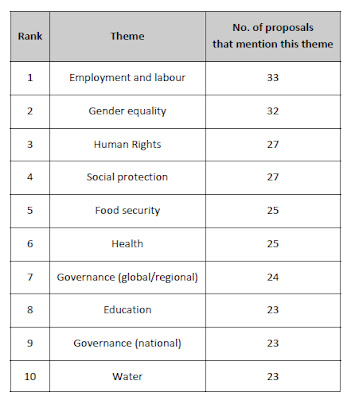 The themes listed in the right-hand table shows overlap with similar analysis conducted by the Overseas Development Institute, and with the results of the UN’s MY World survey, both of which also show employment, food, health, education, governance and water as top ten priorities.
The other three themes in the top ten – gender equality, Human Rights and social protection – feature less highly in other analyses, but have been prominent topics throughout the international policy discussions on the post-2015 development agenda. This is reflected in the three key reports to emerge from the process so far. The High Level Panel, SDSN, and UN Global Compact reports all put forward a specific goal on gender equality, and incorporate Human Rights and social protection within their proposed goals and guiding principles.
A small number (10) of the proposals that we looked at cited poverty eradication or sustainable development as themes, however, we chose to exclude these topics from the thematic analysis as they both represent integral overarching components of a future framework, rather than individual themes that the framework will work to address. Poverty eradication is the overall objective that the post-2015 development framework aims to achieve and sustainable development is the means by which it seeks to achieve it.
Which stakeholder groups are participating?
Just over a quarter of the proposals we looked at came from intergovernmental organisations such as the United Nations Development Program, the World Health Organization, UN entities that relate specifically to post-2015 – including the UN System Task Team, the Secretary-General’s High Level Panel and the Sustainable Development Solutions Network – as well as a number of regional entities like the European Commission, the African Development Bank and African Union Commission.
NGOs also account for around a quarter of proposals, and include national, regional and international entities. The majority of these organisations work on specific topics (like the Basic Education Coalition, the Partnership for Sustainable Low Carbon Transport, and World Vision), however there are also a small number which have a broader thematic mandate (i.e. CONCORD European Task Force). Yet it is noteworthy that there is a distinct lack of proposals specifically from environmental organisations.
Governments account for 14% of proposals, which include recommendations from individual nations like Columbia, Japan, and Mongolia, as well as a number of intergovernmental groupings such as the International Dialogue on Peacebuilding and Statebuilding and the Commonwealth Ministerial Working Group. This figure may well increase as the intergovernmental discussions progress and Member State positions become more developed.
Other stakeholder types represented include Academia (11%) and Think Tanks (7%), with a small number of Major Groups’ submissions accounting for the remainder of proposals. Among the Major Groups, Children and Youth were the most strongly represented so far (6%), while Farmers, Local Authorities and Indigenous Peoples were notably absent. We hope that the recent translation of the SDGs e-Inventory interface into Spanish and French will increase the accessibility of the tool and encourage submissions from these and other under represented groups.
Regional distribution
The large number of proposals by intergovernmental organisations is also evident from the regional distribution, which shows that more than half of the proposals in the e-Inventory are classified as international. In addition to the UN bodies and international financial institutions mentioned above, a number of international NGOs or NGO networks – such as Save the Children and the Campaign for Peoples Goals for Sustainable Development – as well as other global stakeholder coalitions, like the International Trade Union Confederation, also fall under the international category.
30 percent of the proposals emanate from Europe and North America, whereas Africa, Asia, Latin America and the Caribbean, and Oceania combined only account for half this number, revealing an asymmetry in the number of proposals from the Global North and South. This disparity has been recognised by a number of observers of the process (including here, here and here). A lack of resources and capacity to translate experiences into proposals for specific goals, targets and indicators is a likely contributing factor. With this in mind, the SDGs e-Inventory aims to support stakeholders to develop their own proposals by housing a range of resources to provide information on the different processes working towards the development of a post-2015 development framework, and the use of targets and indicators to measure progress.
Stakeholder Forum is also working closely with project partners in the regions currently underrepresented to address the lack of participation from the Global South, and encourage further submissions to the e-Inventory. As other civil society voices have observed, comprehensive engagement of the world’s poorest and most marginalised groups at this stage of the process will be vital to ensure that the new global goals are characterised by greater ownership and empowerment than the preceding Millennium Development Goals framework.
Next Steps
The SDGs e-Inventory will continue to solicit proposals from stakeholders as the intergovernmental process to create a new set of global goals for sustainable development continues. In September 2013, we will publish a more in-depth study of the proposals housed within the e-Inventory to look in detail at the different goals, targets and indicators being proposed across the thematic areas, as well as who is proposing them.

After September, we will then publish updated analysis focusing on the themes of the four remaining OWG meetings scheduled to take place between November 2013 and February 2014. A full timeline for the e-Inventory project (including analysis outputs) is available here.

The SDGs e-Inventory is open to all stakeholders to publish their recommendations for future global goals.  Whether you are working on a particular theme, or looking at a range of issues which span the post-2015 development agenda, we want to know your vision for the new global goals framework. Submit your proposal here.
Amy Cutter and Jack Cornforth