child health, data, health, inequalities and poverty, Inequality, post-2015, Save the Children, sustainability, uncounted, wikichild
You’d be pretty foolish to propose a complete post-2015 development framework right now, wouldn’t you? What with the High Level Panel still to have their second substantive meeting (in Monrovia, following London last November and with the Indonesian fixture to follow), and the global consultations still running… You’d pretty much be putting up a target and inviting attack, wouldn’t you? Still, hard hats on, here goes! 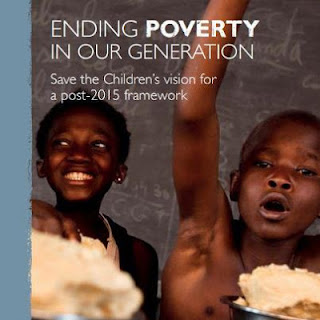 Save the Children today publishes the modestly titled Ending Poverty in our Generation, which sets out a vision of how the successor to the Millennium Development Goals could look. Rather than try to summarise it here, I’ll suggest reading it instead – but you can get the gist of it from the contents page, which is reproduced at the bottom of this post. And Mark Tran at the Guardian has a very good (and kind!) piece up already.
The central points, to my mind at least, are these:
You could summarise this as ‘MDGs+ with our priorities rather than yours’, but I hope you won’t. The intention is not to make the case for this specific proposed framework, and we won’t be lobbying for this as a complete set against any other alternative.
Instead, we’re publishing this because we hope it can be useful, in two particular ways.
The first reflects that we’ve been a little worried about the need to bring the conversation on post-2015 around to specifics. For example, there is in the technical discussions, and increasingly in the political ones also, what feels like an overwhelming consensus on inequality. However, it’s much easier to have a consensus on the importance of an abstract concept than on the actual policy implications thereof. Does that consensus translate, for example, into support for a global goal on income inequality? Or for targets on the ratio of progress between the most and least favoured groups (say by gender, or ethnolinguistic group) in each and every goal? While we recognise there is a long way to go, and that many voices are still to be heard, we hope that putting up a specific proposal may help crystallise some views – even if it’s in fierce opposition to our suggestions!
The second way in which we hope this might be useful is from our own learning. Save The Children is a large and complex organisation, and the process of engaging all the internal stakeholders to reach agreement has been an eye-opening one.  We had (repeatedly!) the kinds of discussions you might expect about how progressive or conservative a position to take in particular areas, and about how much we should be setting a utopian goal, or a politically feasible one. We also had surprisingly creative and good-tempered discussions about the importance of different thematic areas, and how some could be combined rather than excluded, and on where draconian decisions were really needed in order to maintain the clarity and simplicity of the MDG structure.
Of course, that last point  is one that took a good deal of discussion: just how much should we see the MDGs’ simplicity and clarity as an ideal, or at least as necessary to their political traction? You might well take a different view, which could lead to a quiet different structure (or indeed to the absence of one; I confess I’m still attracted to the idea of much broader, and non-exclusive menus of targets and indicators from which nationally-representative processes could prioritise…).
There’s a long way to go. As the UN consultations begin to report back (you can comment on the inequalities draft report here – please do!), and the High Level Panel will start to crystallise some of their thinking, there is still prolonged technical and then political discussion to be had – not least bringing together more completely the thinking and the talking on post-2015 and Sustainable Development Goals.
With a bit of luck, Ending Poverty in our Generation can be of some use in moving these discussions along. Even if it’s just as a target for criticism. Please do share your responses with us, whether in comments below or directly etc. In the end it’s only useful if we learn more publishing it about where post-2015 is going.

Introduction
Building on the strengths of the MDGs
Finishing the job
Addressing the MDGs’ limitations
Responding to changes and new challenges
1) Finishing the job: better outcomes, faster progress
1 Reducing inequalities
2 Increasing transparency and accountability
3 Synergies and systems
4 Ensuring access is not at the expense of outcomes
5 Environmental sustainability
2) Putting in place the foundations of human development
Goal 1: By 2030 we will eradicate extreme poverty and reduce relative poverty through inclusive growth and decent work
Goal 2: By 2030 we will eradicate hunger, halve stunting, and ensure universal access to sustainable food, water and sanitation
Goal 3: By 2030 we will end preventable child and maternal mortality and provide healthcare for all
Goal 4: By 2030 we will ensure all children receive a good-quality education and have good learning outcomes
Goal 5: By 2030 we will ensure all children live a life free from all forms of violence, are protected in conflict and thrive in a safe family environment
Goal 6: By 2030 governance will be more open, accountable and inclusive
3) Creating supportive and sustainable environments
Goal 7: By 2030 we will have robust global partnerships for more and effective use of financial resources
Goal 8: By 2030 we will build disaster-resilient societies
Goal 9: By 2030 we will have a sustainable, healthy and resilient environment for all
Goal 10: By 2030 we will deliver sustainable energy to all
4) Institutional support and enabling mechanisms
Financing and policy coherence for development
Accountability
Data availability
5) Save the Children’s proposal for a post-2015 framework


Ending Poverty in Our Generation is Wikichild‘s most recent Spotlight.