Wikiprogress » Blog » adolescent well-being » The U.S. versus the rich world in child well-being

The U.S. versus the rich world in child well-being

This blog, written by Wikichild coordinator Melinda George, is a comparison between the recently published 2013 KIDS COUNT Data Book on America’s child well-being with UNICEF’s 11th Report card on rich countries’ child well-being. This blog is a part of the Wikiprogress Series on its well-being and progress networks.

Since last week’s launch of the Annie E. Casey Foundation’s 2013 KIDS COUNT Data Book, discussions about America’s child well-being, particularly concerning each states’ rankings, have been a hot topic. (For those of you who missed the highlights, read more here.) The Data Book examine trends of 16 indicators pertaining to 4 dimensions (economic well-being; education; health; and family and community).
In April 2013, the United Nations Children’s Fund (UNICEF) Innocenti office of research launched its 11thReport Card on child well-being in rich countries. This report ranks the world’s 29 advanced economies in terms of their overall well-being, using 26 internationally comparable indicators separated into 5 dimensions (material; education; health and safety; behaviors and risks; housing and environment).
According to this UNICEF study, the U.S. was ranked 26th out of 29 in overall child well-being and was on the lower end for most dimensions and indicators. The Data Book recognises that when the data was disaggregated, the results were strikingly different, particularly the education data for the lowest-income students.
So, how do America’s states and races compare to
the well-being of children in other advanced economies?
Between these two studies, there are 3 shared indicators (low-birthweight babies; child and youth mortality; teen births) and a 4th indicator where the observed age range differs by one year (teens not in education, employment or training; i.e. NEET rate).
I’ve aligned the state and race data* with the rich countries implementing UNICEF’s 3 color system**, showing the first, second and third tiers. I also added a 4th color (the darkest) to indicate the states which are off the country charts. 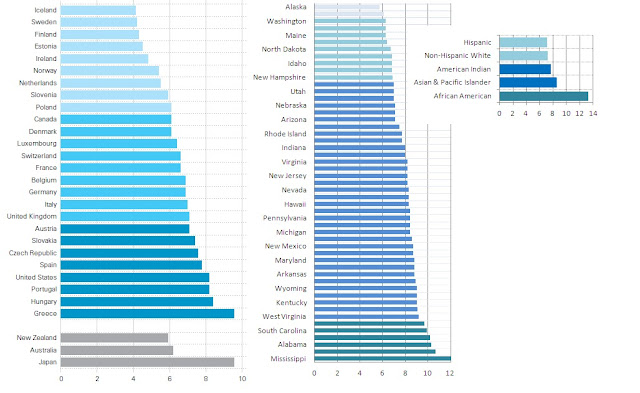 Regarding the percentage of babies born below 2.5 kilograms, Alaska is comparable to Norway, Idaho to Belgium, Georgia to Greece, and Mississippi is off the charts. A majority of the states are in the bottom third of the advanced countries. However, Hispanics and non-Hispanic Whites are in the middle, closer to Germany, while African Americans (at 13.2%) have a much higher percentage of babies below 2.5 grams than the average in Greece (around 9.5%).
Child and youth mortality rate
(deaths per 100,000 among 1-19 year-olds) 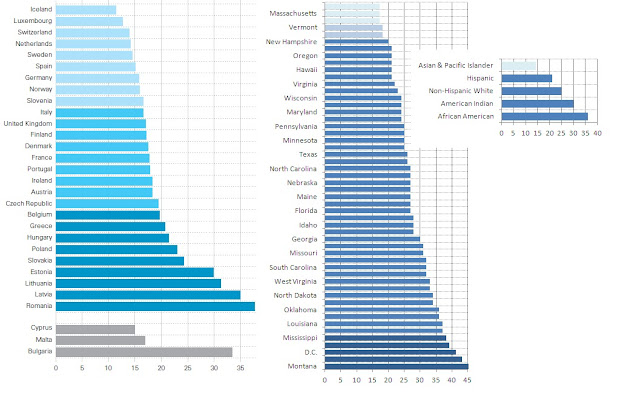 We see the same trend in child and youth mortality rates as we did in the low birthweight percentages. The majority of states are in the bottom third of advanced countries’ rates, with only 5 states in the top two-thirds. However, the Asian and Pacific Islanders in the U.S. have the same rate as Sweden and the Netherlands.
Teen births
(per 1,000 15-19 year olds) 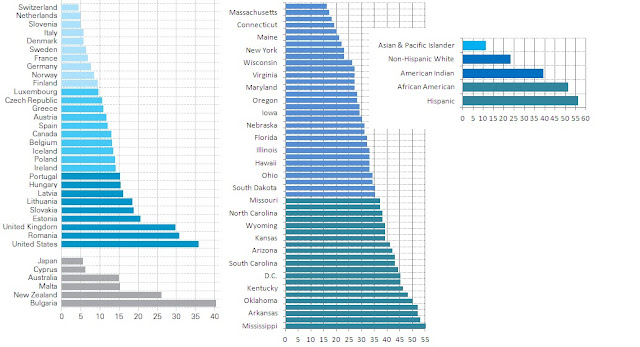 Since the United States has the second highest number of teen births next to Bulgaria, it is not surprising that 21 out of 50 states are off the charts. There are no states in the top two-thirds of the rich countries; however, the Asian and Pacific Islanders are in the middle third, with the same number of teen births (11 births per 1,000 15-19 year-olds) as Greece and the Czech Republic.
NEET rate
Percentage of 15-19 or 16-19 year olds not in education, employment or training 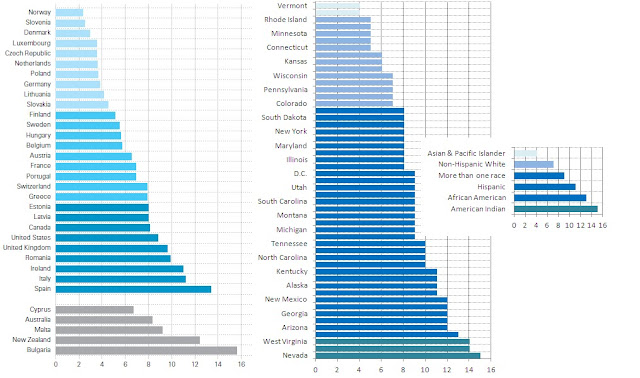 The percentage of teens in the United States neither attending school nor working varies a lot between the states. In comparing with the advanced country rankings, most states were in the bottom third, and 13 states were in the middle third. Also, Vermont and Wyoming have rather low percentages (4%) and are comparable to Germany. When the U.S. data is disaggregated by race, it also is more evenly spread, covering all three tiers of the advanced countries. American Indians have the lowest percentage (15%), only slightly lower than Bulgaria’s percentage. I must note that the UNICEF study observed teens 15 to 19 years old, while KIDS COUNT observed only 16 to 19 year olds in its study.
It’s unfortunate that there were not more shared indicators among the two studies and most of the shared indicators were related to children’s health. While the KIDS COUNT data is most likely very relevant to local policy-making, it cannot be compared internationally.
The Data Book recognises childhood obesity as a growing problem; however, the KIDS COUNT index regrettably does not include an indicator for childhood obesity as there is no 50-state data source available. In the 11thReport Card, the U.S. is almost off-the-charts for its childhood obesity rate in comparison with other rich countries. Comparable data is crucial in order to highlight the problem areas, share best practices, and tackle America’s childhood obesity.
When considering America’s improvements and declines in child well-being, we should look across states, across races and across other advanced economies to get a better understanding of what success looks like. I hope that policy-makers will do the same when deciding where efforts should be spent.
*The data concerning the U.S. is available online at www.datacenter.kidscount.org.
**The countries with grey bars have data for fewer than 75% of the total number of indicators used in the UNICEF study.